The Marcliffe at Pitfodels is a luxurious, relaxed and ultra-elegant five-star Scottish country hotel set in its own picturesque grounds on the outskirts of the historic city of Aberdeen in North-east Scotland. Although the Marcliffe offers a comprehensive range of superb facilities, which has deservedly earned it membership of the coveted Small Luxury Hotels of the World, it is essentially a family-friendly intimate hotel run by Owner Stewart Spence who is fiercely proud of its ambience of warmth, ease and charm.

Since the officially opening in 1993 by Soviet Premier Mikhail Gorbachev, it has earned worldwide renown as Aberdeen's only five-star hotel, and the ideal base for exploring all the many riches that Scotland has to offer. 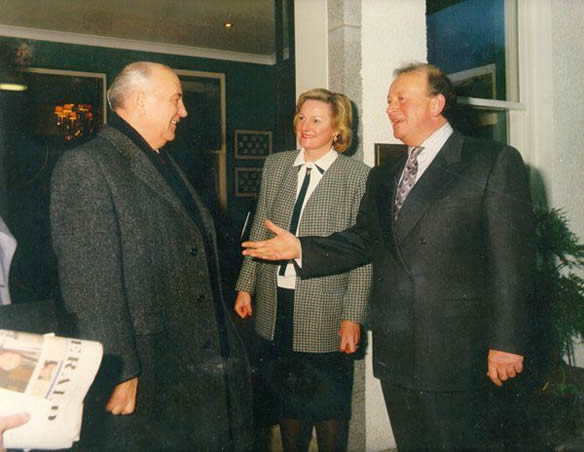 You will have your own reasons for seeking a hotel of the calibre of the Marcliffe - perhaps you wish to visit the Grampian Region for a business meeting, perhaps you simply want to relax and chill-out in the comforting atmosphere of an exclusive hotel, or perhaps you want to be in adventurous mood and strike out on a famous tourist trail in which Scotland is the perfect place to explore the past, the present and the future.

Steeped in history, with an outstandingly rich heritage, you can discover and explore Scotland and all of its glories from your Marcliffe base which is ideally located to embrace and enjoy many of the country's finest attractions - all within easy travelling distance.

When you choose the Marcliffe as your hotel of choice, you can select from our suites and bedrooms - all individually designed with your comfort in mind. Suites and rooms have king-size or zip-link beds, while inter-connecting rooms have king and twin beds to accommodate four guests, with extra roll-away beds available for larger families. Naturally, we all have all the ancillary facilities you would expect of a five-star hotel, including 24-hour room service and our attentive staffs who will guarantee to make your stay at the Marcliffe a most memorable experience.

As one of the UK's most distinguished hotels, the Marcliffe at has welcomed many high-profile guests. From the British Royal Family, there has been HRH Prince Charles and HRH Princess Anne; foreign dignitaries including the Sultan of Brunei; former British Prime Minister and world statesman Tony Blair; actor Charlton Heston and rock star Rod Stewart from the show business world, and legendary US golfer Tom Watson. It also caters specifically for the business and corporate world.

The hotel offers a choice of six private banqueting and conference rooms. These striking individually-decorated suites are ideal for cocktail parties, private luncheons and dinners, and receptions and board meetings for any number ranging from just two to 400. Many special events such as themed banquets, new product launches, press conferences and satellite conferencing are held in the various suites for our extensive private corporate client portfolio. And if you seek a romantic wedding, in the most romantic of countries, the Marcliffe at Pitfodels will provide an all-in package to cater for all your needs - even a kilted Scottish piper!

We are especially proud of our culinary delights. In the design and preparation of our cuisine, our team of chefs selects locally-grown vegetables to complement Scotland's finest fish, meat and game...and reflect the truly Scottish nature of the Marcliffe. Set amid mature trees in 11 acres of wooded grounds, the Marcliffe has an instantly recognisable feeling of the countryside - but is just 10 minutes drive from Aberdeen city centre.

Aberdeen is Europe's oil capital, and one of the most distinctive and beautiful cities in the UK - highlighted by it's predominantly granite buildings which has led it to be known as the "Granite City". Aberdeen has a rich maritime past as a great trading centre- famous for its shipbuilding and fishing industries in the past, and its current pre-eminence as a major and significant player on the global oil and gas industry scene.

Aberdeen is the gateway to Royal Deeside and Balmoral Castle which has been the holiday home of the British Royal Family's through seven generations since 1852. 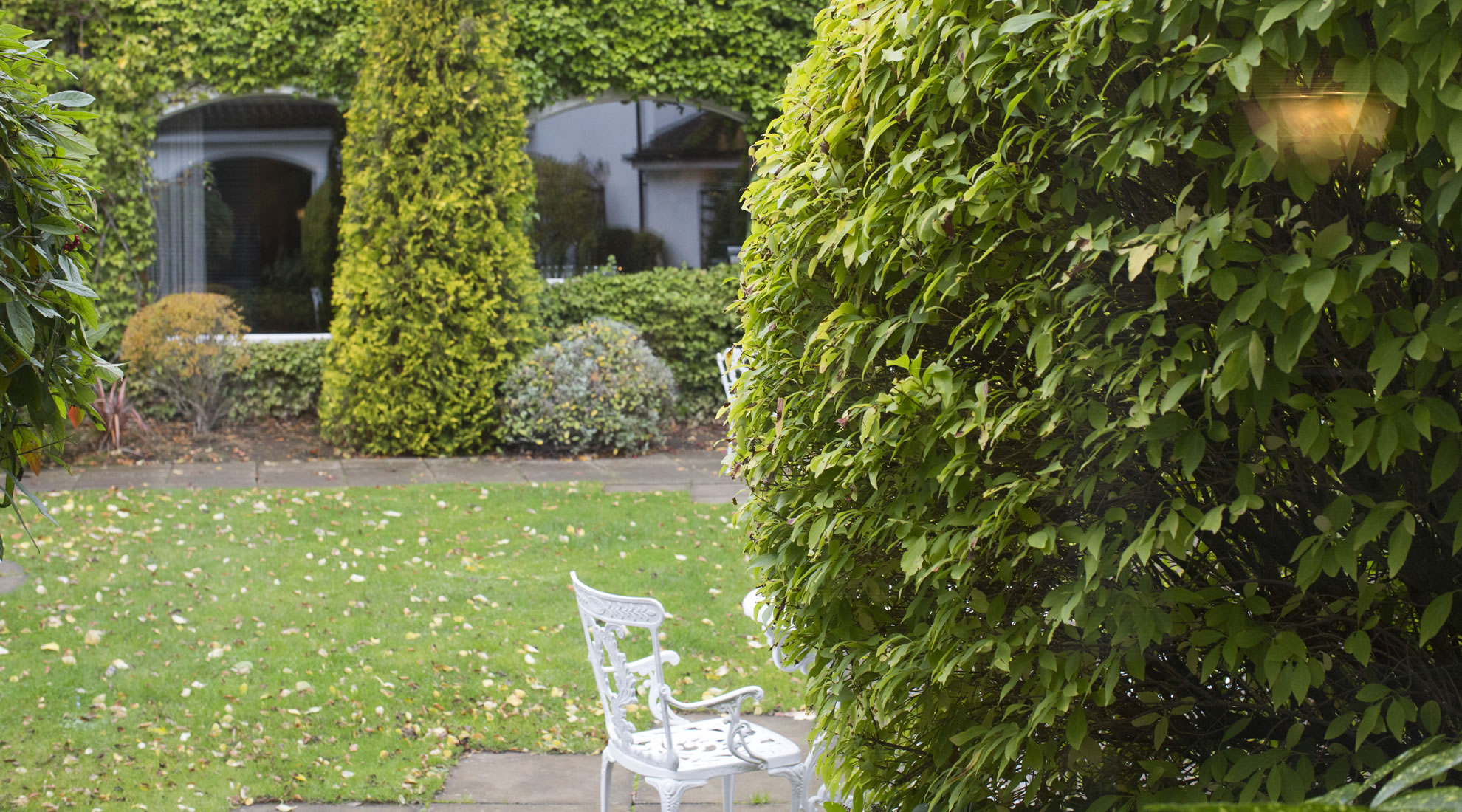 The property, set in 8 acres on the north side of the river Dee, is built on "lot 13" of the original Wood of Pitfodels, which was set out to feu in 1846 by John Menzies, the Laird of Pitfodels, who at that time lived in Pitfodels Castle on the banks of the River Dee, which was then destroyed and rebuilt, and is now known as Norwood Hall.

The feu was purchased by Francis Smith, Head Accountant of the North of Scotland Bank in Aberdeen in June 1848. In 1852 the house was completed and Francis Smith took up residence at Balnagarth, named after the area of Garthdee. He lived there until 1869, when it was then purchased by a leading solicitor in Aberdeen called George Collie, of the firm James and George Collie, living there till 1949. The Collie family owned substantial land at Pitfodels, and several mansion houses were occupied by the family from that time until the present day.

The next owner Mr Alfred Cordiner, from the local well known Cordiner family of timber merchants and garage owners, lived there until 1958 when he subsequently sold the house to Mr James Irvine of the Irvine's of Drum Castle, another famous local land-owning family. In 1974 the house was purchased by Mr Gordon Cochran, solicitor, of Adam Cochran and Company, who remained there until 1987 when the house was sold to Mr Charles Mitchell of Mitchell's Car Hire. The property was then purchased by Stakis Plc, as a site to replace the Royal Darroch Hotel, Cults, which had been destroyed by a gas explosion in 1984.

The property lay undeveloped until 1991, when it was bought by The Pitfodels Development Company and sold on to the Spence family for development into the present Marcliffe at Pitfodels, opening in November 1993. 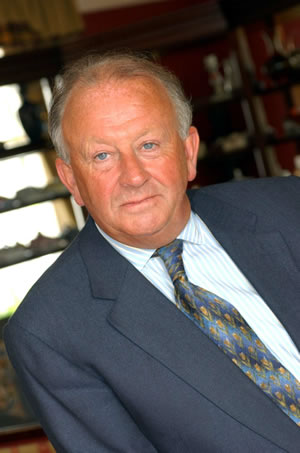 YOUR host, Stewart Spence, was educated in Aberdeen at Ashley Road Primary School and Robert Gordon's College. He opted for a career in the hospitality industry in 1962, at the tender age of 15, as a trainee chef in Aberdeen. The first six years of his career was spent with British Transport Hotels.

From 1993, Stewart has been the proprietor of The Marcliffe Hotel and Spa which was opened in 1993 by former Soviet Premier Mikhail Gorbachev. It is Aberdeen's only five-star hotel (VisitScotland).

Stewart is divorced but was the father of four children; Jackie, Greg, Craig and Ross. Sadly, Jackie died in December, 2009.

Stewart has been a keen and accomplished golfer since his childhood and plays off a handicap of 8. His home club is Royal Aberdeen Golf Club but he is also a member of Cruden Bay Golf Club, Deeside Golf Club, Ballater Golf Club and The St. Andrews Club. He gives financial support to the career development of junior golfers, through the Paul Lawrie Junior Foundation.

An avid fisherman, he fishes for salmon in Russia and Iceland every year, and is an enthusiastic fundraiser for Orri Vigfusson "Patron Saint of Salmon", and the North Atlantic Salmon Fund.

He regularly shops at Harrods (Brioni) and has a passion for Turnbull and Asser shirts, Bvlgari ties and Church's shoes.